Many years ago I was lucky enough to attend a late night performance by Jeff Noon and David Toop of their collaborative Needle in the Groove album, based upon Noon’s book of the same name. Needle tells the tale of a musician called Elliot wrapped up in the history of Manchester’s tangled music scene, following the tortuous route of splintered genres from skiffle through punk to rave, narrated with shimmering lyrical poetry and dense metaphors. The live show consisted of Toop’s hissing samples and scratched rhythms effortlessly recombining 40 years of Lancashire beats whilst Noon’s northern drawl intoned short pieces from his hit novel. The result was a peculiarly hypnotic sequence of soundscapes, an attempt to construct an audio-historical map of Mancunian pop-punk sensibilities, gltichy fragments notating key moments in time. Toop describes this difficult attempt as creating space with sound in his book Haunted Weather, he quotes Michael Chion who writes ‘sound contrary to sight, presupposes movement from the outset… but sound by its very nature necessarily implies a displacement or agitation’, that is sound induces a particular motion or strategy through space. 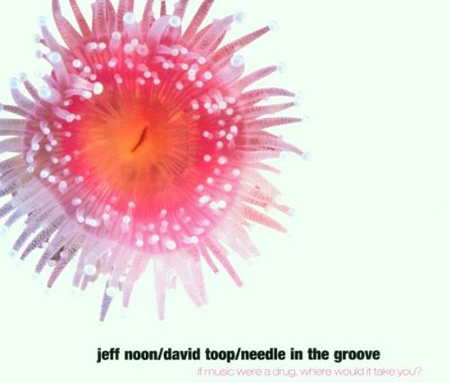 For Noon the result is a city map, a grid of roads drawn from icons such as The Fall and the Bee Gees, avenues of rave and parks of dour indie. Noon envisages this poetic sonic voyage as part of the characters’ creative process, they ‘always start off with some background that Jody prepares, vast dense landscapes, made out of samples, all the stolen moments of the stolen songs, broken open, jammed up solid into new shapes’. There are musicians who take this shape forming to another level. Ryoji Ikeda (whose ear blistering performances I have witnessed at first hand) fabricates stark modulated soundscapes of controlled bleeps, so abrupt that the waves begin to pummel your awareness into a new perspective. He describes this as a staccato acoustic grid and says ‘for me, the most important thing is their relationship to each other’ in essence formulating a matrix of ambience. Critic Kim Cascone in the essay The Aesthetics of Failure writes that this strobing assault ‘con-jured stark, florescent, industrial landscapes; test-tones were pounded into submission until they squirted out low, throbbing drones and high-pitched stabs of sine waves.’ Ikeda strives to manufacture an infinite digital realm of abstract sonic lines.

Hermit architect Peter Zumthor, whose work is derived from a strict phenominological process builds architecture based upon our senses which he describes as ‘giving buildings body awareness’. Zumthor in effect designs a story which generates that stimulus process in reverse, crafting physical structures to induce the potent auditory and touch based framework as opposed to Toop who uses the sound to create the shapes. Zumthor collapses the discreet inputs into a singular stimulus of creativity and the breathtaking richness of his buildings such as the thermal baths in Vals are testament to this determined attitude. Artists like Jem Finer also take this one step further and construct specific ambient acoustic devices in our countryside amplifying the natural dissonance of everyday life. Theorist Paul Virilio views this glitch lead confusion as part of an urban collapse of scale, our senses assaulted by a bewildering array of experiences as being ‘…the end of the outside world’, the sonic map instead casts us into an internal maze of distress.

Writer and Zen practitioner Alan Watts narrates the story of a frustrated Japanese tea master who smashes a clay pot, but by chance a student picks up the pieces and asks the potter to remake it, once reassembled the fine fractures become marked out with gold filigree. Zen master Sanu Riku is enchanted by this fractal beauty and declares it as embracing mushin, that is ‘no specific intent’, or the ‘controlled accident’. The turbulence of the chaotic system gives rise to what Iain Sinclair describes as ‘a series of accidents that occasionally fused discreet worlds’. This chaos is heartedly embraced by musician Markus Popp (of Oval) whose early work consisted of deliberately defacing and resampling cds in order to introduce a shimmering otherworldly noise into the music, the result is strangely beguiling, as hints of ghostly echoes intrude upon the hissing fractures. I’m reminded of Debussy who said ‘people come to music to seek oblivion’, glitch champions this savage dystopia with glee, crafting the gossamer imperfections into an entirely new landscape of the post-industrial world.

Ultimately Needle in the Groove can perhaps be seen as a primer of sorts, the brief crystal shards illuminating an architecture of the body and documenting those hidden realms, a soundtrack for pauses, hinterlands and glimpses. Toop likens this process of inspiration to ‘Japanese paper buried underground, the final organisation of the music is relinquished by its maker, though the elements remain intact as a beginning etched in memory’, the record needle dances along the soft vinyl groove and traces an epic and uncertain journey through the liminal city.