Perhaps in your city there is a structure so potent and glorious that its existence in your mind becomes the actual architecture of your mind, a structure through which all of your dreams and ideas and hopes are funnelled.
-Douglas Coupland

Watching the recent film remake of Brighton Rock, I was struck by how apparently authentic the grubby streets of ’60s Brighton were portrayed. Graham Greene’s original cult novel was set in ’30s Brighton and documented the sleazy underbelly of the thriving seafront and piers, one of ruthless gangsters, conmen and savage loneliness. For Greene the cityscape was populated by drifters struggling in the margins and sparse doss houses beyond the glittering lights and only surfacing at night. He wrote of the stark scene “The light went out and the moon went on like a lamp outside, slanting across the roofs, laying the shadows of clouds across the Downs, illuminating the the white empty stands of the racecourse above Whitehawk Bottom like the monoliths of Stonehenge, shining across the tide which drove up from Boulogne and washed against the pillars of the Palace Pier”. The urban fabric is considered as a canvas for the sociopathic misadventures of the main character Pinky.

The curious thing is that visitors to Brighton still seek out the ruinous West Pier constructed in 1866, a perilous form long since stripped of cladding, its skeletal seaweed entwined prongs the result of arson and storm systems teasing the fabric to winter destruction. The building no longer exists except as a fragmentary symbol, a haunting reminder perhaps of post-modernism’s hollow triumph of icon over substance. Yet, the drunken day trippers gaze upon that halcyon memory, watching the flocking starlings swirl above the salt encrusted iron work. Architect Robert Venturi famously parodied Mies and stated “less is a bore” as an acknowledgement of the layers of cultural symbolism our buildings are historically drenched in. The pier now is a pure totem of Brighton, a zombie latticework  representing the dark heart of Sussex and a faded Georgian past. Journalist Nigel Richardson in his excellent book Breakfast in Brighton acknowledges this stark duality with a Daphne Mitchell quote about the West Pier, “It may well have been all genteel up top dear, but it was like Sodom and Gomorrah underneath”. 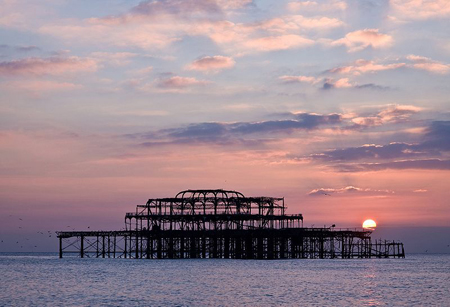 Theoretical architect Lebbeus Woods writes about architectural fabric as part of an attempt to construct a heterarchical city, a free-zone of inconsistency which suggests opportunities and divergent strategies of living, he writes that a realm can be found “within the heterarchical city, another city of unknown shape and substance is constructed, the city which cannot be named. Its inhabitants are those who not fit patterns at all. Their names are known but beg to be forgotten”. The pier’s twisted columns hint at this other city, one of entropy and dystopia, of violence and decay. In the gloomy morning fog it becomes a ghoul stalking the damp shingle banks, metal fingers looming.

The pier’s tangled geometry is also strangely reminiscent of the monstrous house at the heart of the novel House of Leaves by Mark Z Danielewski. The book is shot through with ghostly Barton Fink hallways stretching onward unto infinity, hideous inky darkness licking at the edge of our vision. Poe aptly muttered from the ashen grave “no one should brave the underworld alone”. This multi-layered publication is a mythological catalogue of critical analysis, architecture, socio-geography, journals and scripts, centred around a family and its torturous experience of inhabiting and documenting a mysterious twisted home, the architectural metaphor key to everything, a living Cornell box. Consider that of film, biography, legend and research all entwined like pungent rotting seaweed, recalling a decent into Gothic storytelling. Think too of Gibson’s Pattern Recognition (surely conscious of this prior epic) focused on mirror world instances and a story of heartbreakingly poetic fragments of unknown video pieces without context, as Gibson wrote “we have no future because our present is too volatile”. House of Leaves is utterly in flux. The myth of the structure outlives any physical imprint, as Tony Wilson mused in his retrospective 24 Hour Party People biography “my instinct was go with the myth every time”. The pier’s nascent legend will surely survive the futility of the ageing form-work.

The header quote from Coupland refers to the Lion’s Gate bridge stationed within his beloved Vancouver, one which underpins faded memories of youthful adventure, now a ghostly after-image to help structure his heartfelt nostalgia. The West Pier lurks in the liminal psyche of nautical Brighton, an exhausted cathedral accumulating a duality of shattered dreams and tense mythologies from that troubled seaside city.