When the water come rushing, rushing in- The Sisters of Mercy
Sunshine is delicious, rain is refreshing, wind braces us up- John Ruskin

The recent deluges upon Reading in Berkshire alerted me to the fact that it is a locality enveloped and often framed by glossy rivers. The town’s celebrated independent publisher Two Rivers Press’ name directly alludes to the mighty Thames that neatly bisects it and the Kennet that feeds and has a symbiotic relationship with the hungry Kennet and Avon Canal. However, there are also a number of smaller bodies of water running through the district such as the sinuous River Loddon whose origins lie in the town of Basingstoke and which lumbers next to the southern edge flooding the fertile land of rural Berkshire. When the abrupt storms tore at old trees and enraged the waterways, the ecological trauma reminded me of a recent George Monbiot quote from his excellent book Feral, ‘we live in a shadow land, a dim flattened relic of what there once was, of what there could be again’. The glum weather shakes us out of our sleepy stupor and teases us with the primeval thoughts of change. 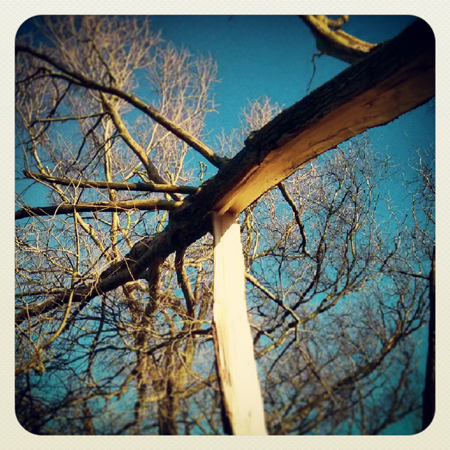 A Boxing Day walk of ours along the Loddon ended in sudden failure. The dark waters swollen by seemingly endless rain had erupted across the sodden parks and lanes to greet the suburban houses. It had drowned the footpaths and remade the landscape into an inaccessible primal vale. I was reminded of the novel The Children of Green Knowe by LM Boston, and of a 1980s BBC Christmas television adaptation that depicted the novel’s environments as stark shapes and ghostly shadows. The book concerns a young boy called Toseland who is sent to stay at the old house of Green Knowe which is enveloped by the magical memories of his family. He arrives after a tremendous storm which has left the ground as inky river and the house as a stout island in the night. Boston writes ‘Mr. Boggis handed him the lantern and told him to kneel up in the bows with it and shout if they were likely to bump into anything. They rowed round two corners in the road and then in at a big white gate. Toseland waved the lantern about and saw trees and bushes standing in the water, and presently the boat was rocked by quite a strong current and the reflection of the lantern streamed away in elastic jigsaw shapes and made gold rings round the tree trunks. At last they came to a still pool reaching to the steps of the house, and the keel of the boat grated on gravel. The windows were all lit up, but it was too dark to see what kind of a house it was, only that it was high and narrow like a tower’. The ancient home wrapped in the liquid embrace of nature becomes an ark of sorts, a cabinet of curiosity whose hidden passageways reveal all the folklore of its past thus rewarding the inquisitive Toseland who has ventured across the strange waterways to reside within. In Reading the river is now sadly apparently bereft of much of this folklore, though occasional glimpses of off grid boat communities living on the margins as well as its annual water festival, along with the return of surging floodwaters helps reignite its bewitching charm, a welcome injection of mystery into the edge-lands. 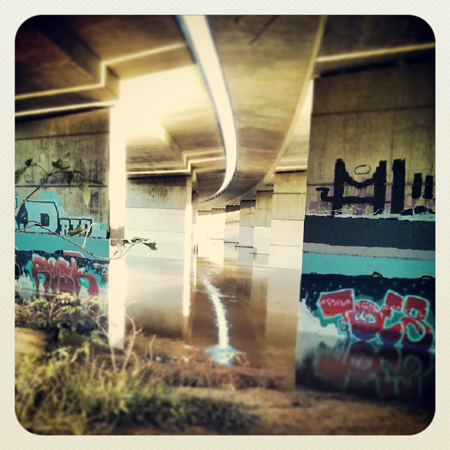 When the rivers rise up to greet us and drown the land we are also reminded of the hidden waterways that our urban planners have rendered invisible. For some people these are the most intriguing of rivers, and there has been a recent drive to open up entombed and tamed Victorian trenches to the sunshine once more. Underneath the heart of the town centre runs the Holy Brook, a six mile long ribbon forced into brick and concrete shackles and partially concealed below a shopping centre and library. It is a neat reflection of TS Eliot’s declaration that ‘a river is within us, the sea is all around us’. Beneath our unknowing feet lurks a realm of damp courses and icy rivulets. The route of the stream is wonderfully documented in the Two Rivers Press book The Granator’s Tale Map and Guide by Adam Sowan which also comes with a handy map illustrated by Peter Hay. Sowan recounts the history of the brook and its part in the life of the town and quotes historian Ernest Dormer who argued that ‘the brook is more closely connected with the rise and progress of ancient Reading than the Kennet, and certainly the Thames’.

One can use the spidery hand drawn map contained in the book to follow the journey of the Holy Brook from its outfall at Chestnut Walk backwards along a labyrinthine passage of sombre office block car parks, dank cut throughs and concealed tunnels towards the waiting leafy countryside and bubbling source. The water passes under the library where one can peer down by the entrance way into its murky face. Behind the library is a bizarre zone of half finished urban developments and graffitied office blocks and here it flows between the raw remains of the Abbey’s walls where it was believed to have once powered a grain mill. It is an effort for the pedestrian to locate the glittering line of the water, hunting for fragments of the old brook, a quest echoing Miriam Darlington’s words ‘to some new stream or marsh that I have yet to explore’. However, tracing its route further back west it can also be glimpsed alongside the banal Oracle shopping centre before it disappears once more behind a row of converted Victorian shops. It subsequently slides under a number of back streets and the A33, towards the vast anonymous industrial units of Rose Kiln Lane, the parallel footpath making a dash for open greenery and freedom.

On one occasion under summer skies we explored the brook from the other end, tramping through green fields serenaded by bird calls, past converted mills and the occasional meditative fisherman before passing the gnome strewn gardens of suburbia and descending into the town itself. Sowan finishes his book by noting ‘as a walking route to the west it is much slower than its parent’s (Kennet) towpath, but the Holy Brook – unpredictable, unsanitised, hole and corner thing that it is – has many rewards for the determined explorer’. The brook provides a useful marker for the author’s examination of the geographical origins of the county, a linear device for articulating tales of intricate histories. 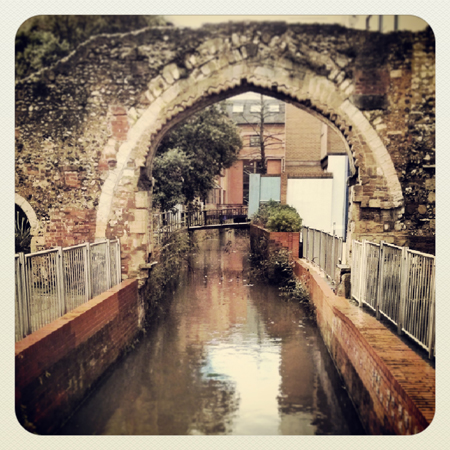 Mike Davis in his book Ecology of Fear dissects the vast battle between the megacity of Los Angeles and the natural world which preceded its construction. In it he describes southern California as ‘Walden Pond on LSD’  and the Los Angeles river as ‘straightjacketed’ into a now iconic armoured concrete basin, (site of explosive Hollywood hot rod races and other illegal activities in films such as Terminator 2 and the marvellously quirky Repoman). Traversing the mutilated river becomes an act of defiance, blocked by towering fences the law abiding person now has no part in this industrialised vessel. Davis notes that the ‘river, the defining landscape of the ninetieth century city was sacrificed for the sake of emergency work relief’. The metropolis turned its grey back on the lifeblood of the citrus farming community, choosing an arid and sanitised desert over the rich floodplain ecology of the marsh. Occasionally however the flash floods of California rise up and claim swirling muddy vengeance upon the sun drenched citizens. Reading also turned its back on the Holybrook, abandoning the little river to a series of culverts even though it had helped drive industry and sate the thirst of its inhabitants. As we have seen, Berkshire’s rivers too awaken to consume the surface with sodden maws, helping to redefine the relationship with their surroundings. Richard Mabey in his short book Turned Out Nice Again says of a particularly savage tempest he experienced that ‘the alchemy wrought by that storm changed my whole view of weather’, these pacified corridors are given a chance opportunity to reinvigorate the immediate neighbourhood in an unexpected manner when they billow in anger.

Walking the hidden brook that slices through the historical detritus is an excellent way to prise open the alchemical guts of the city, out of which spill slate coloured herons, electric kingfishers and virulent knotweed. It is a handy mirror upon our own troubled urban minds. Nature poetry master Chinyo-ni whose enigmatic works captured the fragility of the changing Japanese seasons wrote a water haiku inspired by her eight day meditation that perfectly captured this enigmatic reflective quality, ‘even, the flowing water, doesn’t say anything’. She saw a calm peace within the river, and the brook offers us this opportunity too. I shall end with a quote from the lovely Caught by the River compendium book by writer Jon Berry who penned ‘rivers run through men as surely as they run through the landscape’. Walking the brook, indeed any river is an act of contemplation and when this is emboldened by the power of a flood it becomes an act of psychogeographical transformation.