The work often has all kinds of echoes
– Richard Long

I was kindly given a copy of Bill Drummond’s latest book 100 for my birthday. Within it he responds to a question regarding ‘the end of the process of art’. He is asked if he considers any of his work complete and counters with the somewhat futile example of the project Smell Of Money Underground. Drummond is acutely conscious of the ponderous haphazard nature of his efforts and says ‘I am aware that once an idea starts to push itself into my consciousness and then starts to clamber for attention and finally demands that I turn it into a reality, I end up paying some sort of emotional if not physical price’. His creative adventures hence are concepts typically thought through to a logical if somewhat terminal conclusion, whether that is a ridiculous number one hit single or choosing a song to be played at his funeral.

I have displayed upon my lounge wall small fragments of this particular strange project that I purchased from Penkiln Burn. Five landscape format cards, each signed and having a tiny mounted foam backed square are all presented within an A2 glass frame. The squares have been carefully sliced from the Richard Long print Smell Of Sulphur In The Wind. Drummond, outspokenly fond of Long’s work, famously purchased the print for $20000 and then frustrated with the general state of English art and beholden to a print which could not compete with his rural Wiltshire view sliced it into 20000 equal pieces in order to sell them on. The eventual aim of the endeavour is to take the $20000 sum total and bury it in the centre of the circle depicted in the photograph. The structure is located in Iceland’s wild tectonic landscape, thus turning the creative process full circle and embracing the damp stony shards of its geographical origins.

Drummond describes his admiration for Long in his semi-autobiographical book 45. He writes of the opportune connection with Long’s walking art having discovered him on one of his own quests in London as he followed the path of his capitalised name roughly inked onto a scruffy A to Z. Stumbling around a corner Drummond chanced upon a private gallery selling Long’s map works. Spying the work for the first time he mused that the art ‘obviously described a walk in a most minimal of zen like way’ and this immediately resonated deeply with his Ordinance Survey loving family’s treks over bleak landscapes as a disgruntled youth. 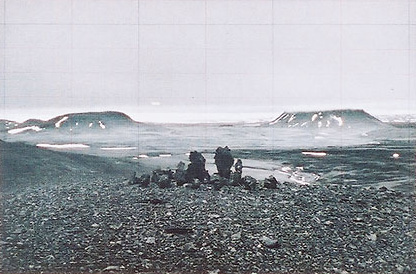 A smell of sulphur in the wind © Richard Long

Long is (if you are not already familiar with his epic work) a Turner prize winning British artist who works with the environment to create geographical and walking based art which responds to the liminal qualities of landscapes in flux. The results are stark black and white photographs of marks worn into soil and rock, hand drawn maps documenting psychogeographical events or gallery based sculptures which bring the raw materiality of stones and mud back into the immediacy of the sterile art world. Long revels in the wanderlust of perambulation and says ‘I’m from the hitchhiker generation. When I lived in London I would hitchhike regularly back to Bristol, and maybe stop off to walk a line in a field in Wiltshire, then back on the road again. I lived in a very free world. I was light on my feet, that’s very important in my work.’

Long’s Heaven and Earth exhibition in 2009 at Tate Britain was a triumph of energy and helped document a vast body of work in a lofty formal context. I found the map sketches particularly thought provoking and a welcome glimpse into the private thoughts of a solitary rambler. Nicholas Serota, director of the Tate, wrote in the exhibition notes about one of Long’s first strikingly pure works ‘In A Line Made by Walking (1967), a work made at the age of 22, Long changed our notion of sculpture and gave new meaning to an activity as old as man himself. Nothing in the history of art quite prepared us for the originality of his action.’ The guide also contained a sequence of Long’s quotes which forms a beautifully eloquent observation of our physical connection with making and wandering.

The simple text and card shapes upon my wall then ultimately represent an elegant connection between two artists I admire, in a brilliant accidental manner. I will probably never be able to afford a complete Long work, though I can reflect upon the chance connections and fortuitous intermeshing of two outsiders as I walk along my own muddy trails across this country. This is the mysterious territory of Rebecca Solnit’s heroic lone walker who is ‘both present and detached, more than an audience but less than a participant’. One can revel in the subtle echoes between geography and thinkers effortlessly curating together the drifters, the makers and the arcane map junkies.