It is inevitable that the engineer preoccupied with function and aiming at an immediate response to new demands should produce new and strange forms, often startling at first, bizarre and disagreeable.
– Le Corbusier

Walking northwards alongside the winding tidal estuary of the river Adur from Shoreham town one passes under a most curious and elaborate concrete structure. The intersection between the A27 and A283 floats above the deep valley and accommodates the sharp and tangled terrain by offering up a labyrinthine series of stomach churning spirals. Lovecraftian otherworldly geometries intersect over tidal surges and docile farmland ‘swallowed up by an angle of masonry that shouldn’t have been there; an angle which was acute, but behaved as if it were obtuse’. Transport engineers in a bold gesture wove four levels of road infrastructure into effectively what are two ash grey skewed toroids in order to resolve the speeding vehicles into some semblance of order. The road splines float on rapier thin concrete fins which effortlessly slice through the soft rolling landscape, striding over the waterway, sculptural arcs unconsciously aloof and alien. 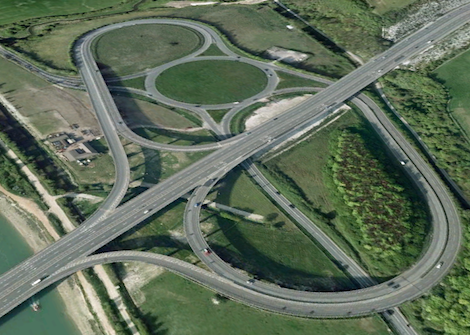 It is a gesture of pure Ballardian starkness and when viewed from afar echoes Berthold Lubetkin’s penguin enclosure at London zoo, whose razor thin twin ramps were a bold Constructivist gesture in 1935 and a triumph of plasticised space. Lubetkin ended his career in bitter solitude and cursed the failure of Modernity for formulating ‘a society that openly professes that the present is expendable and the future unintelligible begets artists who have to scream to be noticed and remembered for a quarter of an hour’. The Brutalist forms of the swooping interchange then perhaps can be considered as an inheritor of this bold subjection of the natural world, the motorway is the feral child of Corbusier and Mies.

Transport intersections channel a kind of arcane hybrid geometry, although they are conceived as elegant and efficient solutions to the problem of connectivity, the resulting runic ensembles when viewed from above or plotted on maps mark some kind of lost order or spidery language, a codex of giants long since passed into mythological obscurity. This is the territory of the mischievous psychogeographer with a taste for urban misadventures. Neil Gaiman and Terry Pratchett’s darkly comic book Good Omens which concerns a devil and angel conspiring to prevent the apocalypse has a part that details the efforts of the devil Crowley who torments mankind on a massive scale so he has time for hobbies. He subtly alters the planned route of the M25 Orbital, which effectively turns the tarmac into the world’s largest magical symbol. They write that ‘very few people on the face of the planet know that the very shape of the M25 forms the sigil odegra in the langauge of the black priesthood of Ancient Mu’, formulating a miasma of misery and woe endlessly tuned by the slow moving Audis of England’s south east sprawl.

From below, the structure’s concrete forms suggest tendrils of an artificial sky, attracting macro climatic atmospheres, channelling the whimsical ghosts of alchemical weather machines and Tesla coil conspiracies, the turbulence manipulating the dripping water and soft mossy surfaces. Architects Superstudio dreamed of remodelling the world into vast orthogonal regimes shaping the landscape as the building. The Modernists were torn between the rigour of the 90 degree angle and the bezier curve white heat dynamism of technology. The interchange with its lofty on and off ramps enshrines this clash of geometries and civilisations. Bill Drummond in his excellent (semi) autobiographical book 45 documents a haphazard journey, rolling around the M25 in 25 hours, 124.5 miles per loop in the battered van of one Gimpo Green. Drummond confesses in sleep deprived delirium that he is ‘hoping to discover or uncover some psychogeographical facts about both the ancient and modern roads and routes that radiate out of the unseen metropolis, around which we are winding and tightening our strange spell’. For Drummond the asphalt drenched armatures mark out both a sense of unease and opportunity, they are devices for scrying a sense of place amongst the hinterlands.

Of course it is impossible to discuss the snaking highways without a final nod to the father of crash dynamism JG Ballard. His novel Concrete Island details a man thrown from a savage car crash who finds himself trapped in a filthy edgeland between fast moving vehicles. The protagonist is forced back into a state of pre-civilised wandering, scavenging for scraps in the liminal spaces between bewildering corridors of speed. Abandoned, he notes ‘the whole city was now asleep, part of an immense unconscious Europe, while he himself crawled about on a forgotten traffic island like the nightmare of this slumbering continent’. The Shoreham interchange slices through the lush fold stamping out a liminal border zone between the mechanical and the biological as we shelter under the concrete sky above.